This essay, by Joanna and Jack Santa Barbara, is derived from a presentation given to the Nelson Tasman Climate Forum in September 2020.

It relates strongly to ideas developed by Jeanette Fitzsimons in ‘The Economy of Enough’.

We’re thinking that you may tend towards one or other of two orientations to this topic: on the one hand you may think it’s high time we got our minds around this idea of a regenerative, redistributive economy, and that, without this, we won’t achieve a stable climate. On the other hand you may be thinking, ‘Come on, guys. This is a climate emergency. We haven’t got time to make a nicer society while we’re fighting the flames.’

We hope we have something here for each perspective.

Let’s first acknowledge that what brings us together in this hui is our conviction that we must weave our communities together to work to stabilize the climate and adapt to the impacts of climate change. And that we are in, right now, an emergency state.

We hope to show you that:

If this is true, concern about this must be part of our urgent climate work.

What’s an economy? It’s the means we use and the choices we make when we take natural resources, then convert, distribute, trade and consume them to provide for the needs of ourselves and others, then dispose of the residue or use it as feedstock for other resource conversions. 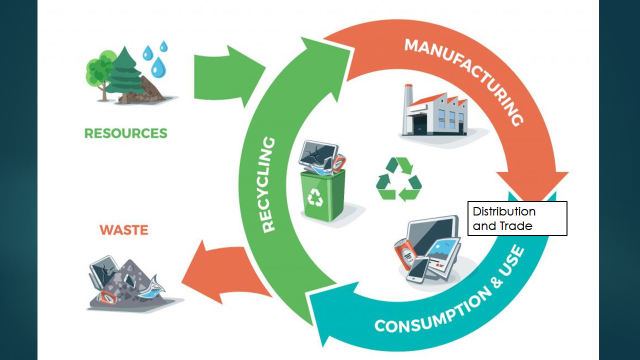 What’s an economy for? What should be the goal of an economy? (Take a moment to consider this.) The wellbeing of all the people within the sustainable limits of this planet.

What’s wellbeing? After 70 years of focus on financial wellbeing only, the idea of several domains of wellbeing is finally taking hold. Not only financial, and the stuff we’ve made and built, but also human, social, cultural and knowledge assets (sometimes referred to as capitals), and the natural environment contribute to human wellbeing. 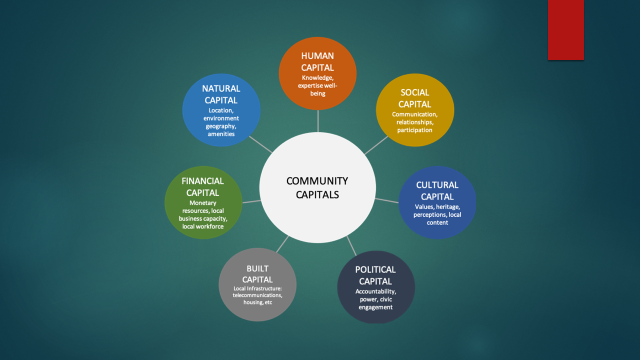 This is the version our Treasury Dept. uses. 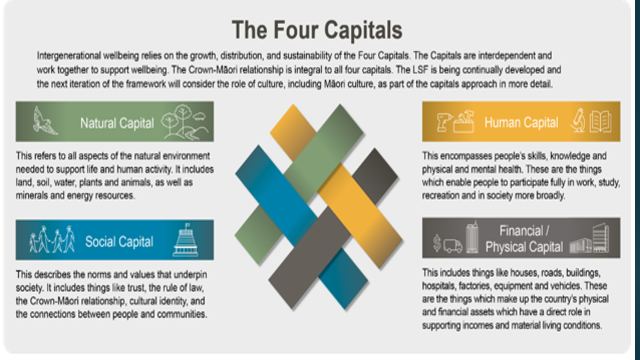 What’s the goal of our present economy? If we listen to the business broadcasts on our daily media we’ll hear about profits, quarterly growth and Gross Domestic Product, GDP. GDP is the monetary value of all goods and services produced within an area within a time frame. It’s assumed the more goods and services, the better, no matter what they are. The following slide makes it readily obvious that counting all economic activity in GDP is a problem. Nonetheless, increasing GDP is the dominant goal of every government on earth. 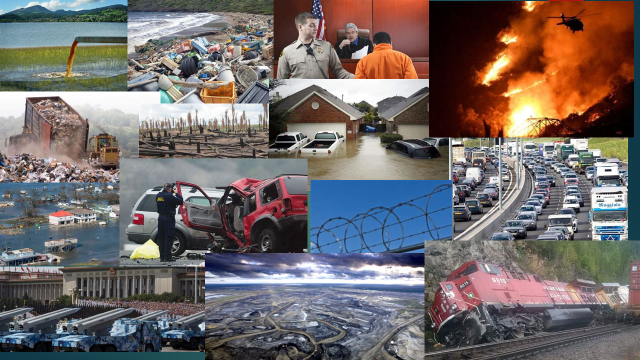 Important for us is the fact that greenhouse gases are emitted in activities (agriculture, transport, industry) that grow the GDP, but trash the planet.

There’s another problem – it’s often used to measure the welfare of a population, although its inventor, Simon Kuznets, warned against this use, saying it could not be used to measure citizen wellbeing. There are many contributors to wellbeing that are not traded in markets, therefore not measured in GDP, and therefore do not feature as goals for our economy. 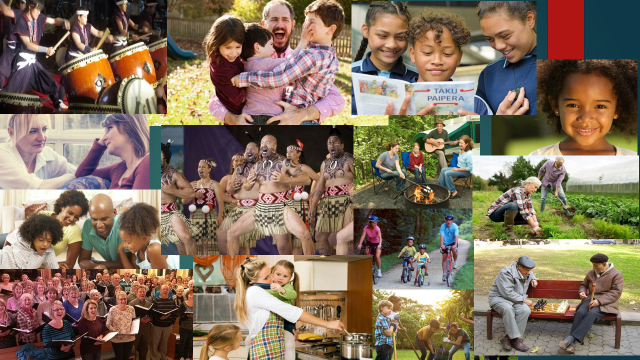 This may be enough to convince you that GDP is not a good measure of wellbeing and that growing the GDP is not a suitable goal for our economy, and may, in fact, be a dangerous one, especially for the climate. If we compare GDP growth with a multidimensional measure of wellbeing, such as the Genuine Progress Indicator (GPI), the disconnect is obvious. Much of what we truly treasure is not counted in GDP at all. 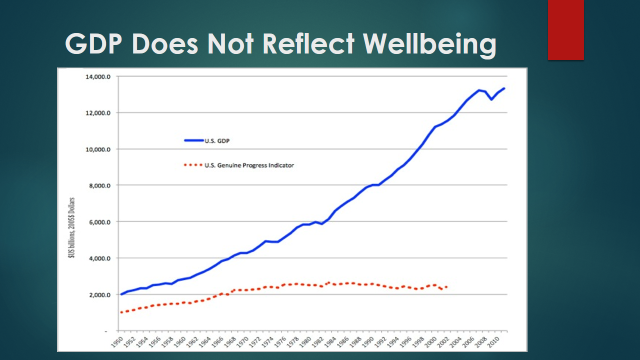 Another multidimentional index of wellbeing is the Human Development Index (HDI) developed by the United Nations. The following graph shows that GDP is highly relevant to wellbeing as measured by the HDI at very low levels of income (about $10,000 per person per year), but that more income above that level does not add much to wellbeing. 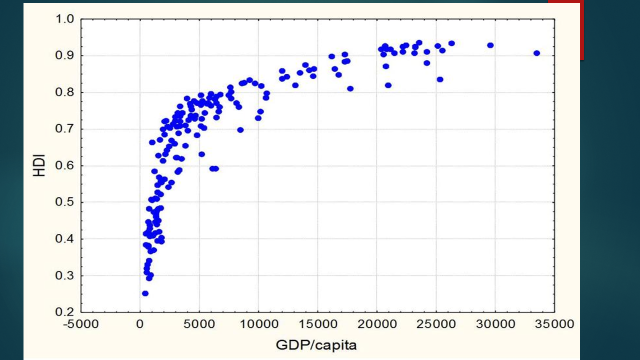 Despite these disconnects between GDP growth and wellbeing, action on climate change has been stalled by insistence that economic growth is the over-riding goal. This mindset must change.

Some Examples of Growth Associated with GDP Growth

The following graphs indicate the extent of growth in a number of areas, especially since 1950 (the vertical line in each graph). In the middle column, we see that both GDP and Primary Energy use accelerated from 1950 to present. 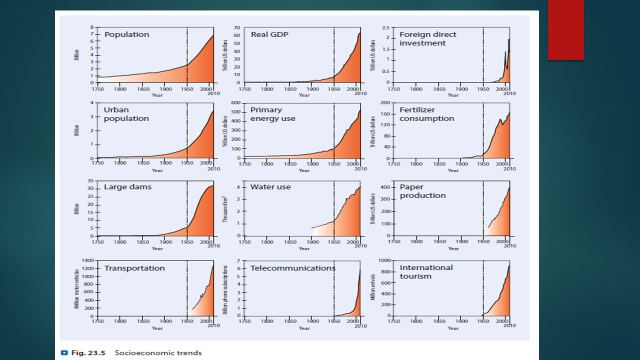 The same acceleration is evident in a number of environmental problems associated with this GDP and Energy growth. 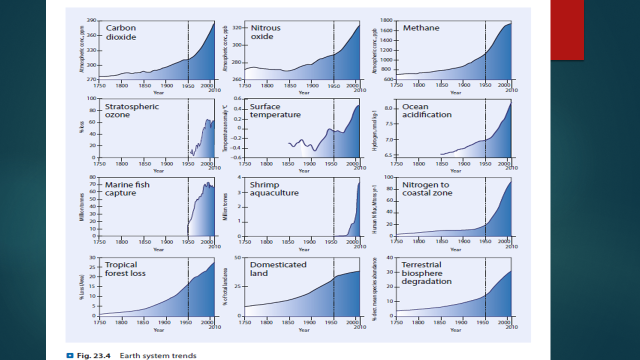 Do we need a more equal society to achieve climate stability?

Let’s look at how a family in the lowest decile might react to aspects of the necessary transition to a low-carbon future. First of all, because they’re stressed about paying the rent, feeding and clothing their kids, and maybe even housing them, they don’t have much time for reading, thinking, discussing or acting on climate change. If they hear that we should cut down on meat consumption to help the climate, they laugh, because they can’t afford much meat anyway. They live far away from their places of work and have a clapped out, unreliable car to get them there. When they hear that petrol prices are going up because the ETS has put the carbon price up, they’re angry.

When this happened in France, they got out on to the streets as the gilets jaunes or yellow vests, and protested and rioted until the policy was reversed.

Last week new data appeared on wealth inequality in NZ. I think it will shock you. 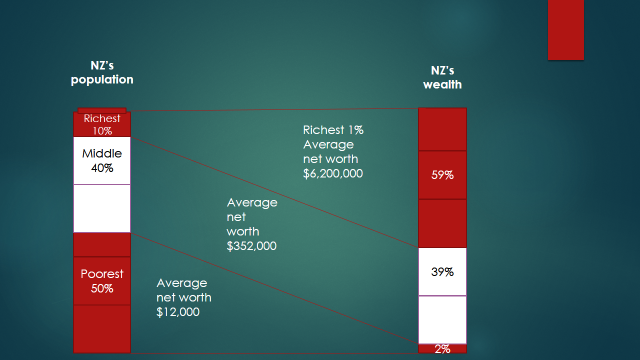 Global wealth distribution looks like this. The top 1 % of the global population . earn some 56% of global income; the top 20% earn over 80% of global income. The poorest 40% earn less than $2 per day. This “wine glass” distribution also reflects Greenhouse Gas Emissions – the wealthiest amongst us emit the most by far. 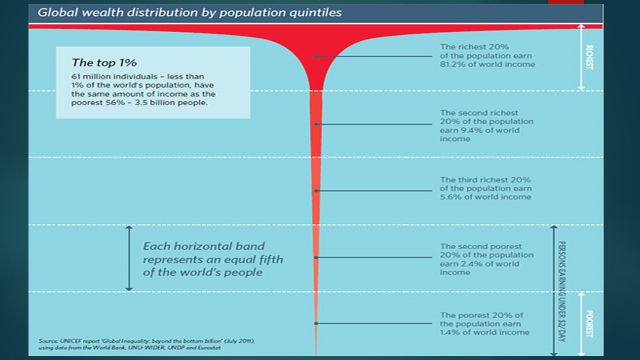 On both a global and national scale it is helpful to keep in mind that those with the most wealth are not just the billionaires and multimillionaires. The following slide shows that globally, anyone with wealth above $100,000 USD is within the top 10% of the wealth pyramid, and collectively control over 80% of global wealth. 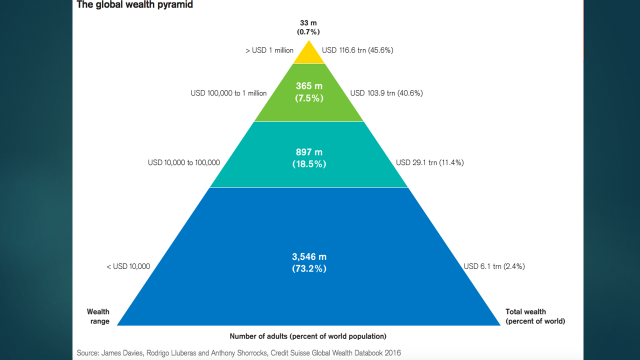 Distribution of consumption looks similar. The well-off, and perhaps most of us are among them on a global scale, consume more than our fair share, and emit far more than the poor. Social comparison, inflated by skilful advertising which creates novel wishes, drives much of our consumption – to be seen as more affluent than our peers – a very questionable value.

Weaving our community together to move on climate action is what our Forum is about. The weaving together part is hard to do in this economic structure. He waka eke noa – we’re all in this together – is where we need to be, but we’re not…yet.

What’s a better goal for our economy?

We would start with values – the sort of values we find in indigenous societies everywhere, and here, particularly in Maori culture. Love and respect for the whole web of life, and seeing ourselves as part of it, with responsibility to protect it. And sharing the wealth we derive from Nature with everyone in society. (Whanaungatanga, kaitiakitanga, manaakitanga.)

Our goals then might be the health of our planet, the wellbeing of the people, the resilience of our systems – Hey! This sounds like the structure of our Forum, doesn’t it?

Economist Kate Raworth is skilled at using arresting images to convey this. She calls this the Doughnut Economy. The next graph shows that humanity has exceeded a variety of planetary boundaries in addition to climate change (the red areas on the outer side of the circle). It also draws attention to a number of social dimensions on which we are collectively failing (the red areas on the inside of the circle. These areas show the ecological ceiling and the social foundations (respectively) that we need to learn to respect for sustainable wellbeing. We need to learn to live with the sweet spot, the Goldilocks’s Zone, between these two limits. 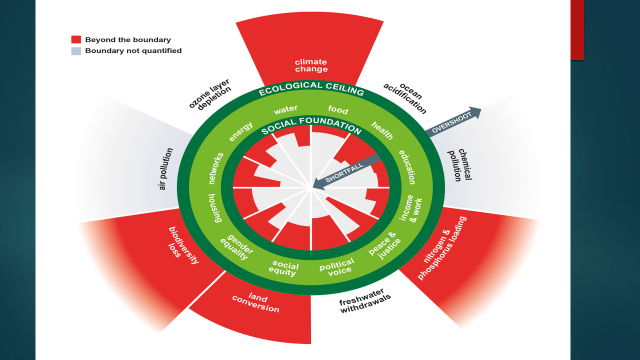 The following graph shows our goal – living well within planetary boundaries. This is the new goal for a regenerative and redistributive economy, a safe and just space for all humanity. 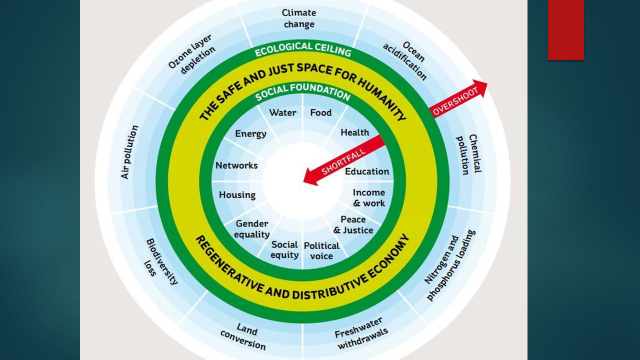 Action on the planetary limits is needed, and this already engages everyone in this Forum.

A Regenerative Economy situates our human activity in Nature, living by harvesting what Nature continually provides, and can continue to provide into the future.

The idea of limits is important. A future with less energy as we move from fossil fuels to renewables is inevitable. What energy is available will have to be used judiciously – to prioritize essential wellbeing goods and services to ensure community resilience. And it will have to be distributed more equally. The old story of growing the economy and letting wealth trickle down to the poor never was true and is now dangerous. Redistribution is needed and attainable, ensuring that gross inequalities are reduced and eventually eliminated, to ensure everyone’s universal human needs are met.

There’s a body of evidence to support the idea that people are happier in a society that protects the natural world, that is more equal and in which the goal is human wellbeing in all its dimensions.

Let us work together to establish a new goal for our economy. 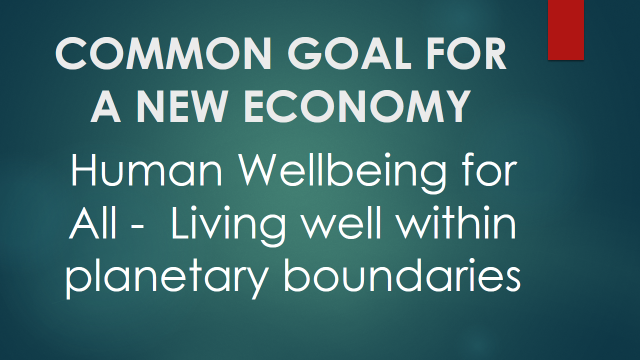 So what can we do to move in this direction, as citizens of NZ and of Nelson Tasman? Here are some ideas of things we can do to facilitate and encourage a transformation of our economy. We encourage you to post questions and comments on Ning, and we’ll try to monitor the site frequently over the next month.

Examples of ideas to both bring people together to share work on a project, as well as have the project provide some tangible benefit (physical and or social) to members of the community.

All the examples below contribute to a Regenerative or Redistributive Economy (which contributes to Adaptation to Climate Change), and some also address climate Mitigation more directly.

Resources to Learn More about a Sustainable Economy

Raworth, Kate. Doughnut economics: Seven Ways to Think Like a 21st Century Economist. 2017, Penguin. This is probably the book to start on – highly engaging and readable. Likely available in your local library.

Fitzsimons, Jeanette. Enough! The Challenge of a post-growth economy. 2013 The Religious Society of Friends. A beautiful 23-page essay, developed for the Quakers.

Jackson, Tim. Prosperity Without Growth. 2nd edition, 2017, Routledge. If Kate Raworth’s book gives a brilliant picture of the economy we want, Tim Jackson tells us more about how to get there.

Daly, Herman and Cobb, John. For the Common Good: Redirecting the Economy Toward Community, the Environment, and a Sustainable Future. 1989, Beacon. The classic, by Herman Daly, the father of ecological economics.

Daly, Herman and Farley, Joshua. Ecological Economics. 2nd edition. 2011, Island Press. The textbook, for those serious about the topic.